Pulp Monsters at location TD02 has had to pull out unfortunately


Timeline Miniatures is now at TD02.
The program has already gone to press, so this will not be in the map except at the Information Booth

Posted by freecloud at 12:14 No comments:

Hi everyone, some info on the tickets for Salute 2015:

As part of our plans to reduce queuing to a minimum we are using an E-ticket system. If you buy your ticket in advance from http://www.salute.co.uk/salute/salute-2015/  then the cost is £10 (that's slightly less than last year).

If you buy on the door it is £15 cash only. So buy in advance and spend that £5 on some nice stuff from the traders!


Why are we doing this?

This year has seen the introduction of a new ticketing system for the South London Warlords show Salute, what follows is a short explanation to try and shed some light on this change.

From my point of view I think probably the main reason this change was implemented was because we needed something that would help get people into the show much quicker and easier than our normal queuing system.

Over the past few years the queues have been getting longer and harder to deal with, once the doors opened at 10am we then had to get the advanced ticket holders in and then we had to start to collect the money for all those paying on the day!

This has been an issue that we have wanted to try and deal with for many years.


It was suggested that I look into E-ticketing as a way forward to help with this issue, and after a few meetings and a lot of scratching of heads we thought it would be good to at least try this and see if it helps with this years show, but for it to work at all we felt we needed a separate hall to do this in.
Well after some negotiating with ExCel we managed to get a separate queuing hall at one end of our normal show hall, and with making an entrance in the temporary wall system we have taken the queues off the boulevard, what this means is that this year visitors will enter the show from this queuing hall.

In this queuing hall we will have people with scanners for the pre-paid advanced tickets and a section to take the cash on the day ( hopefully from just after 7am!! ), this will mean that at 10am, when we normally open the doors, everyone in the queuing hall will have had their tickets checked or paid their money and will be ready to enter the show!!

Hope you all have a great show.

Posted by freecloud at 20:53 No comments:

These are the categories for 2015

HISTORICAL 1
Historical Wargames Single figure: Infantry or Cavalry – Up to and including 54mm


HISTORICAL 2
Historical Wargames unit Infantry or Cavalry - 6mm to and including 54mm: 3 to 40 figures

HISTORICAL 3
Historical Wargames unit other - up to and including 54mm: up to 5 figures or models*

SCIENCE FICTION 5
Science Fiction Wargames unit: up to and including 40mm: 5 to 40 figures

SCIENCE FICTION 6
Science Fiction Creature or Vehicle - creature/vehicle can be any size: up to 3 items*

FANTASY 7
Fantasy Single Figure up to and including 54mm Scale

FANTASY 8
Fantasy Wargames unit: up to and including 54mm: 3 to 40 figures

FANTASY 9
Fantasy Creatures or Vehicles - creature/vehicle can be any size: up to 3 items*

MISCELLANEOUS 11
Miscellaneous Class - any figure or unit not covered by the above 10 classes. Including dioramas.

JUNIOR 12
Junior Class - any figure or unit covered by any of the above 10 classes painted and entered by a person up to and including 16 years old.

SALUTE FIGURE: 13
Painting the Salute Twenty Forteen Figure  Enter your painted version in this SPECIAL CATEGORY and the best one wins a trophy and Prizes

BEST OF SHOW
Win a Special Themed Prize
There will be a trophy for First and Second prizes in each numbered category (1 - 12) and a First Prize Trophy for the Best of Show.
One Entry per Category per contestant
Entries close at 12 noon. Winners announced at 3.30PM.

South London Warlords
www.salute.co.uk
Posted by freecloud at 20:40 No comments:

Salute & EXCEL- we are not going anywhere

The South London Warlords would like to reassure gamers and traders that SALUTE will be held at Excel for the foreseeable future.

We operate on a rolling contract with the management at Excel and, as such, we are committed to running SALUTE there in 2016 and beyond...
Posted by freecloud at 20:36 No comments: 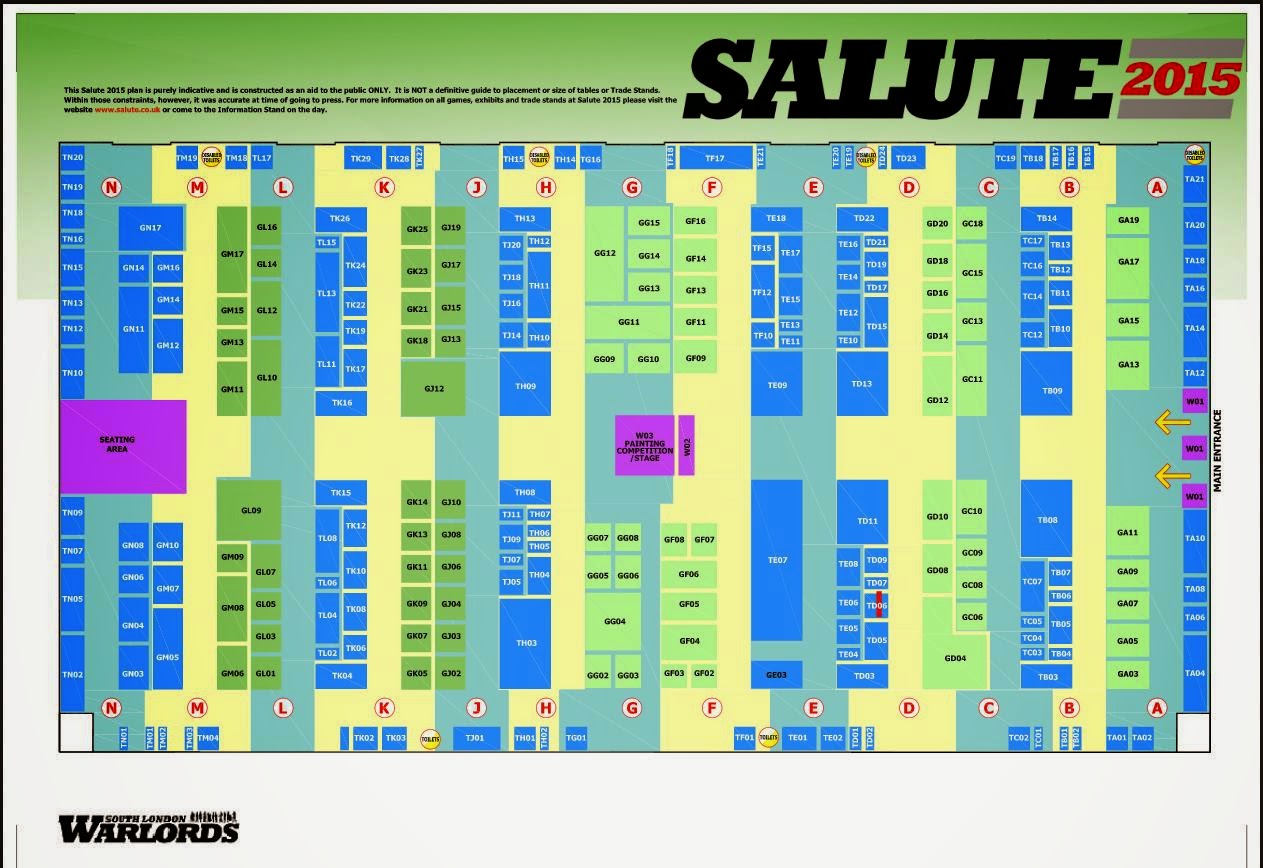 Salute 2015 Map to plan your purchase route (pdf of map shown above)
http://www.salute.co.uk/files/salute2015planv10a.pdf

Getting to South London Warlords and Salute
http://www.salute.co.uk/webpage.php?pid=16508