Planning is now underway for Salute 2012 on 21st April 2012, and a big part of that is making sure that we have plenty of games at the show.

Email invites have now been sent to all the gaming clubs we have contacts for (see this post). There have been a few bounce-backs, and of course, just because the email has been accepted doesn't mean it hasn't ended up in a spam folder or with an ex-member, so if you haven't had your invite, please get in touch!

And if anyone has contact with the following clubs, please let them know that we've tried to email them and had the email rejected...


Thanks for your time. 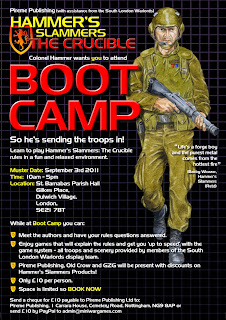 Learn to play Hammer’s Slammers: The Crucible rules in a fun and relaxed environment


While at Boot Camp you can:

Send a cheque for £10 payable to Pireme Publishing Ltd to:

Just to avoid confusion - this is NOT a South London Warlords event. It's an event at our usual hall, run by the author of the game who 'just happens' to be a long-standing member of the club and organised by Pireme, the publishers of the rules. Basically, it's a chance to get the best possible start with the rules, to grab some figures, and (to be honest) to play with some of the nicest figures and terrain going.
Posted by Colin Hagreen at 18:25 No comments:

Despite the apalling weather in the real world a group of Warlords had another great Big Game Saturday. THe usual 40K crowd turned up with 8000 points per side - certainly not the size of game we could fit into a Monday evening! 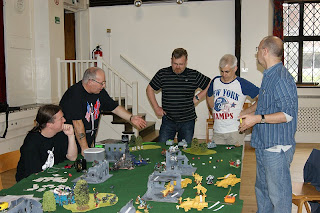 John-Paul (Orks), Jim (Orks) and Warren (Dark Eldar) took to the field against Chris B (Space Marines), Steve (Tau) and Chris S (Eldar). The Orks brought out the big guns in the form of a rather nicely painted Squiggoth (credits to John-Paul). 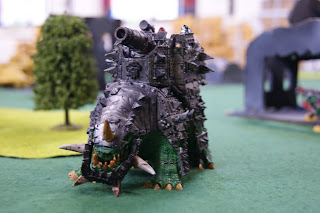 The forces of order faced an uphill battle in such a target-rich environment and the Orks/Dark Eldar certainly played to their strengths, getting the first turn and speeding towards their anxious opponents. Despite the heroic forward actions by the Marines and the withering firepower coming from the Tau machines the latter turns of the game became an exercise in objective denial, as can be seen by the Tau's attempt at parallel parking.
In the final event, the forces of disorder triumphed on the day. Units of the match? The Tau performed valiantly in the centre, eventually vanquishing the Squiggoth, and the Ork Rocket Boyz expertly harried the flanks. One notable mention in dispatches goes to Chris Barrass's Space Marine Sargeant who, with massive bravura, destroyed a large squad of greenskins with only his combat blade!
The next Big Game Saturday is in September - hope to see you there!
Posted by Colin Hagreen at 17:49 No comments: